Hujatul Islam Wal Muslameen Syed Kazim Sabere Member Ullama Council, Anjuman-e-Jamiyat Ullama Asna Ahriya Islamia School Karigil and Current Executive Councilor LAHDC Kargil, while addressing to a gathering of more than eight thousand peop
le, firmly condemns the organized terrorism committed by the occupying entity against the Palestinians and called upon the Centeral Government of the country to shoulder their responsibilities towards what the Palestinians are being exposed to, particularly those who live in Gaza, and to sever their relations with the Israeli entity.
He Requested the President, Prime Minister and the Foreign Minister of India, on behalf of the people of Kargil, to pressurize Israel, to withdraw the bombing and massacre as soon as possible.
He further added that India is the most succeful Democratic Nation of the world and was made free from the rule of British 60 years ago, so we have to consider the freedom of the poor people of Pelistine and should pressurize on the Isearili government to immidieatly stop the massacare of humanity in Gaza.
Later Vice President Anjuman-e-Jamiyat Ullama Asna Ahriya Kargil Hujatul Islam Wal Muslameen Syed JAml Uddin Mossavi prayed for the peace and communal harmony of the nation and also prayed for those massacred by Israelis in Gaza 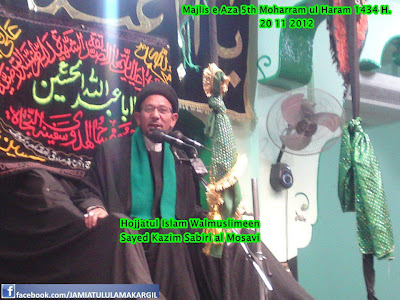