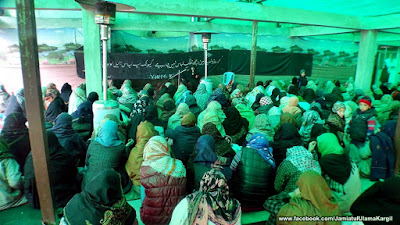 About Hazrat Fatima Masooma (s.a)
From the children of the seventh Imam(a.s.) Hazrat Fatimah Masooma bint Musa ibn Jafar(a.s.) has a special position after Imam Riza(a.s). Due to her faith, virtuousness and training under the guardianship of Imamate she reached such a position that the Ma’soom (Imam) gave her the title of Ma'soomah (infallible) , and because of her worship and abstemiousness she acquired the status of intercession. This is why the most learned scholars, the greatest Maraje', and the real Gnostics are humbly standing at her holy shrine saying:
O Fatimah(a.s.) intercede for us in heaven since you have reached a dignified status from a high rank with Allah(swt)
There is a tradition that states that out of the eight gates of heaven, one will open towards Qom and due to her intercession all Shia’s will go to heaven. Her eighteen years of life was spent with suffering and difficulties. Had to bear separation from her beloved brother.
Visitors entitles to Heaven
In tradition it is excessively mentioned that whoever visits (does ziyarat of) Hazrat Ma'soomah, heaven is incumbent upon that person and this position is obtained by her after the fouteen Ma'soomeen.
Imam Riza(a.s.) has said:
Whoever visits her (does her ziyarat) acknowledging her right, is entitled to heaven.
In Kamil al ziyarah it is quoted form Imam Riza(a.s)
Whoever does the ziyarat of Masooma in Qom it is as though he/she has done my ziyarat
Majlisi quoted in Bihar:
Whoever visits Ma'soomah it is as though he/she has visited me. It is equal to heaven
Heaven of Ahlulbait(a.s.)
Ma'soomah stayed in Qom fro seven days only. Due to her brief stay and her holy shrine, Qom was blessed with such a special position that Imam Jafer Sadiq (a.s) says:
Haram of God - Mecca
Haram of Rasool- Medina
Haram of Imam Ali –Kufa,
and the Haram of Ahlul bait(a.s.) is Qom
According to the quote of Imam Musa ibn Jaffar(a.s)
Qom is refuge of Aal Muhammad(a.s.)
A group of people from the town of Rai came to Hazrat Abi Abdillah (a.s) and said that we are the settlers’ o Rai.
Imam (a.s) said: Welcome to our brother from Qom
They said again: "We are from the town of Ray. Imam (a.s) replied with the same statement as before. This act repeated several times, then Imam (a.s) said that:" God's haram is Kufa, main and my progeny's haram will be Qom. Qom is a small Kufa. From the eight gates of heaven three open towards Qom. One chaste lady from our family, named Fatimah will be buried there. Her status and position is such that due to her intercession all Shias will go to heaven.
It is due to the blessed lady Masoomah, that after the city of knowledge Najaf al ashraf the greatest center and learning institute of the Shia world is in Qom, surrounding her holy shrine where more than twenty thousand students, the most learned scholars are busy studying, teaching and conducting research. This city has embraced numerous libraries and learning institutes with in its vicinity.
Death
After the shahadat of our 7th Imam, Imam Musa Kazim(a.s.), the 8th Imam, Imam Ali Riza (a.s.) took care of his family and his sisters.
Bibi Fatema loved her brother immensly (similar love as that of Bibi Zainab(s.a.) and Imam Hussain(a.s.)). In 200AH Mamoon Rashid called Imam Riza (a.s.) to Khorasan from Medina, no family member was allowed to accompany him. Bibi Masuma missed her brother very much and left Medina for Iran to meet his brother. When she reached Saveh, which is about 62 Km from Qom, she learnt the news of shahadat of her brother. On learning this, she became very ill and asked to be taken to Qom. Musa ibn Khazray took this dignified lady to their home. Ma'soomah passed seven days in Qom suffering from illness until finally she departed from the transient abode on the 10th of Rabi-us-Sani at the age of 18. She was buried in Qom.
at 1/14/2017 02:54:00 AM