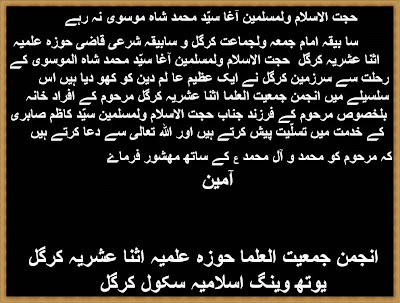 The first Imam Jumma of Kargil Hojjatul Islam Walmuslimeen Syed Mohammad Shah al Mossavi Mir Waiz Saliskote and Ex Sharai Qazi Anjuman-e-Jamiatul Ulama Hauza-e-Ilmiya Madrasa Asna Ashariya (Islamia School Kargil) expired last night at his resident at Saliskote. He was 93.
Thousands of people participated in the Nimaze Janaza of Mossavi at Saliskote.
He left Kargil for Hozai elmiya Najaf in Iraq for Islamic Studies and remained as the student of Ayatollah Syed Mohsin Hakimi, one of the greatest Scholars of Islam and after completing his studies returned Kargil and joined Islamia School Kargil as Preacher.
He was the First Imam Jumma of Kargil in the times of Late Hujjatul Islam Sheikh Mohammad Mufid as President of Islamia School Kargil and after many years he was appointed as Qazi Sharah of Kargil at Hoza Elimya Asna Asharia Islamia School Kargil. 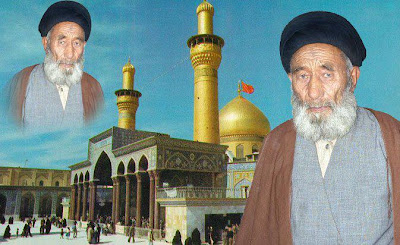